I was suffering from full-hard-drive disease for a couple of months. So last week I finally ordered an external drive to hold the piles of data I store on my MacBook Pro. This is what I got:
Everything came in mail today, so I unwrapped it and put it together. 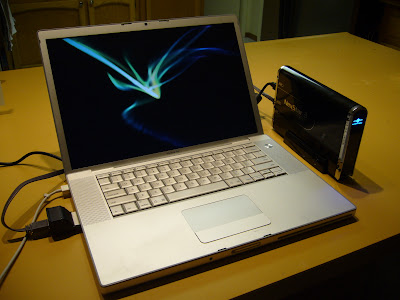 The Vantec enclosure looks really good and has a very good feel to it. It feels much better than any other enclosure I put my hands on. Very sturdy, slim, well designed and well assembled. Thanks to the fact that it's aluminum based it keeps the hard drive REALLY cool - during heavy use it is just a bit warmer than my hand.

I picked the Vydeo/Meritline eSATA card based on the "feature set /price" ratio and didn't really know what to expect because there is not as much written about it on the Internet as I'd like. Luckily there were no surprises so far.

The card is based on SiI3132 chipset and the driver supplied with the card is an unmodified Silicon Image driver (version 1.1.5). When I tried to install it however, it didn't work. But the one I got from Silicon Image support site worked fine (version 1.1.9). I had to restart my MBP to get MacOS X to recognize it though. 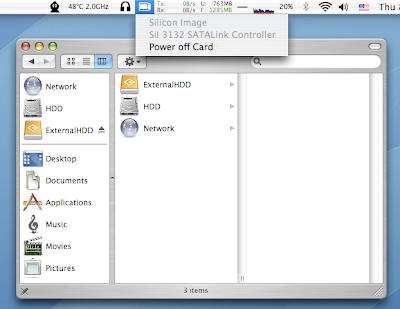 The only other complaint I have about the card is that it is relatively easy to accidentally unplug. It is safe enough to use on a desk, but I don't even want to think about the data corruption caused by an accidental unplugging while using the computer on my lap.

I ran a few very unscientific benchmarks to see what to expect from my new toys. Here are the results.

Looking at these numbers I'm pretty happy with my purchase. Not a bad outcome for little less than $300 total.
Posted by Igor Minar at 5:23 PM

Nice! That's bloody fast. Well the only thing I wouldn't like is to have that card. In my case the slot is usually taken by MMC reader and obviously I need to have both - external hdd and card reader. Another fast alternative is My BOOK Pro 500GB It has triple interface USB2.0/FW400/FW800. FW800 it's fast enough even for having a lightroom database there. And it's $100 cheaper (pricegrabber). Plus it looks nice (check the color of your laptop and the color of your enclosure :) )

I have 1 gen of MBP, so the fastest I can go with FW is FW400, that's why I was looking for eSATA solution.

The My Book Pro looks good though.