End of the MacBook Problem Saga?

Back in November I wrote an entry about all the problems I had with a MacBook, that I bought for my sister and how I returned four MacBooks before I finally got a fifth that actually worked (see "A Basket of Rotten Apples").

After posting the entry I though that my troubles were over, but had no idea how wrong I was. Only one week later the battery on that MacBook died.

There were no signs of problems before, the battery performance was good and it was already formatted according to Apple's instructions. MacOS X failed to recognize the battery and the charger would not detect it either. It look as if there was no battery in that notebook. There was just a battery crossed with an X and text "No batteries available" in the menu. 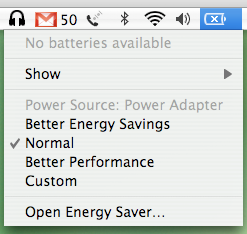 Since at that time, I was already in Slovakia (my home country), I was happy to find out that the 1 year complementary Apple Care warranty program had worldwide coverage. After browsing a little I found out that it usually takes no time to get the battery replaced. With all this information I called the closest Apple dealer and explained to him my situation. I got an estimate 4-6 weeks!!!

It seems that Apple has no direct representation in Slovakia and thus all the service parts as well as regular orders are being handled via a Slovak company that is somehow connected with Apple in some other EU country. The whole thing is very confusing, nontransparent and worst of all causes enormous delays in orders and repairs. The Apple dealers in Slovakia are pretty unhappy about this whole situation, but as one of them told me, there is nothing they can do about this.

So I waited and waited and finally on the last day of January (about 6 weeks later) I got an email from the dealer that he finally got my replacement battery. So I borrowed my sisters notebook and went to visit the dealer. New battery worked fine, but during this repair I noticed yet another problem - the infamous MacBook Discoloration!

The dealer was kind enough to order a new keyboard cover immediately, but he wasn't able to give me estimate on this repair.

Only one week later, my sister called me and told me that the second battery had just died - in a same mysterious way as the one before. So besides the keyboard cover, yet another battery replacement was on my repair list.

According to discussion on this blog, there is a bunch of people who had two or more batteries replaced, one after another due to the same issue. Apple claimed that that this was not a notebook, but rather battery related issue.

Another month went by and I finally got my sisters notebook fixed. It has been more than two weeks now and the battery is still working and there haven't been any new issues so far. I don't want to be premature, but I hope that this is it - end of the saga!

All the problems are fixed now but I still feel ashamed for all the trouble I had with a notebook that was supposed to be great.
Posted by Igor Minar at 5:10 PM